Hakama - who can wear one? Ladies can wear royal blue hakama from Day 1 but the black hakama is subject to permission of the Principal and worn by Instructors and assistants - it denotes Samurai status.

Permission may given to 1st Kyu's to wear hakama, in their club, by their Club Leader at an appropriate juncture. Where they hold permission to wear Hakama in their Club it will not be worn by 1st Kyu's away from their club such as courses until after at least 6 months in the grade.

Hakama will not be worn at gradings by 1st Kyus testing for 1st Dan. (Its a right of Dan Grades to wear hakama.)

Why do we wear white belts? Most Aikido Associations are similar to us - white belt until your are Dan grade (ie Black belt) its traditional. However some Associations have adopted coloured belts systems to signify changing grade. We all follow a grading system where there are usually 6 grades below black belt

So how do you know what grade someone is - simply you don't.

Isn't that a problem or dangerous? - No because all students are being taught to be aware and feel through contact the easy of movements. It is evident to someone differences in grades through doing the techniques.

Are instructors paid? The Lancashire Aikikai is a vountary body - it has no paid instructors or officials - we exist for members

I've seen Aikikai badges on gi - where csn I get one? Aikikai badges for Gi's are on sale in local Clubs. Club's restock via the Secretary at cost in batches of 10.

Does the Lancashire Aikikai hold recognition of the governing body for Aikido in the UK? Yes its a member of The British Aikido Board (BAB)

I'm told I have insurance. What is it? To practise you need to have current membership of the Aikikai and through this you are issued with a blue slip. We issue this slip for the governing body the British Aikido Board (BAB) the details of policies and certificates can be found on their website

Or see our Membership and Insurance page under "How we work"

Books - there are Aikido books - just make sure its one that is relevant to our style of Aikido. Perhaps discuss in Club and gain a recommendation. Some Clubs have a lending system. However don't think that its a subsutuite for training!

Equipment - some clubs source these cheaper than being bought in shops. A judo suit has thicker material than a Karate suit and so more people use judo suit as some of the aikido moves involve holding onto a person's suit.

Other equipment in due course you will find you you need are wooden weapons: sword, stick & knife (bokken, jo, tanto). And a bag to carry them to and from practise. 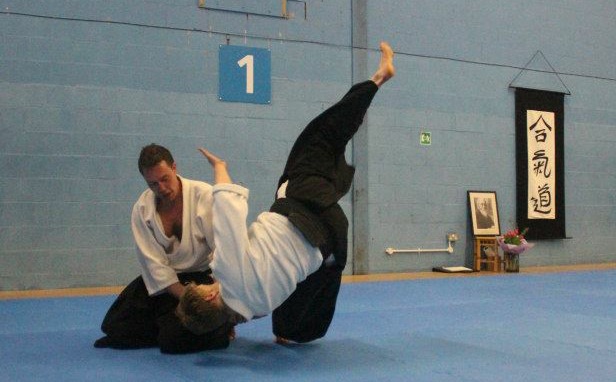