When the Second World War broke out Mr. Mucha joined the Polish forces in France (October 1939) and trained in Northern France. He saw action in Belfort, France 1940 and then, together with his regiment withdrew to neutral Switzerland. In March 1942 he left Switzerland and crossed into occupied France. In February 1943 he left the continent via Spain and Portugal, landing in Britain on 13th March 1943 Here he rejoined the Polish forces and returned to France in 1944 where he was wounded in action. Although his activities during the war were a very important part of his life and must have had some bearing on his later outlook, he is still not willing to give details of this time.

Returning to Britain after being wounded, he was hospitalised in the Polish Hospital in Ormskirk, Lancashire. It was at this time that he met his future wife. After the war he decided, following a brief visit to Belgium to see his parents, to settle in this country.

As a child he had heard tales from sailors and travellers of the Japanese martial arts, of how a small man could throw a large man. These tales had caught his imagination, though there was no opportunity for him to try it out for himself, as there were no clubs until after the war. He did not get this chance until working at English Electric in Liverpool in 1954, where there was a Works Club and he was able to begin to practice Judo, at the age of 35.

There were no high grades to teach at that time, the teacher being a 2nd Kyu. He remembers how when a 1st Kyu visited they all bowed very low because it was a rarity. Gradings were taken locally at other clubs including at the Birkenhead Amateur Judo Association.

In November 1954 Mr. Mucha went to see a demonstration of Judo by Kenshiro Abbe, 8th Dan, who was in the process of forming the British Judo Council. He was very impressed by Abbe Sensei and resolved to practice with him. Later Mr. Mucha and his wife were to form a friendship with this great teacher who is remembered by Mrs. Mucha as a marvellous man. Sometimes Abbe Sensei, who at that time was based in London, would stay at their house when visiting the area.

“Abbe Sensel was a 6th Dan in Aikido,” she recalls, “and once when he was performing a throw Marion asked him how he did it. 'It's Ki power,' he replied, and told him about Aikido.”

“He was also a Dan grade in Karate and his sister was a spear champion. They were a great martial arts family he was presented to the Emperor; which was a great honour.”

In 1962 Mr. Mucha was awarded 1st Dan in Judo, but before that, on a Summer School in Chigwell in 1956, he had practised Aikido for the first time. A demonstration was given by Sensei Ken Williams, one of the first people in this country to be taught Aikido. Half the day was spent practising Judo and half a day Aikido. Mr. Mucha was fascinated by Aikido, since it seemed to him to be a real fighting art. Being a fighting man, this appealed to him. Though at this first introduction there was much he did not understand. He felt that there was something about it that attracted him even more than Judo.

From then on he started training in both Judo and Aikido, which was being taught in Eastham village in the Wirral, by Mr. Ken Wainwright. Wainwright Sensei, 1st Dan at that time, had been taught Aikido in Japan. He was 3rd Dan when he died. ........ 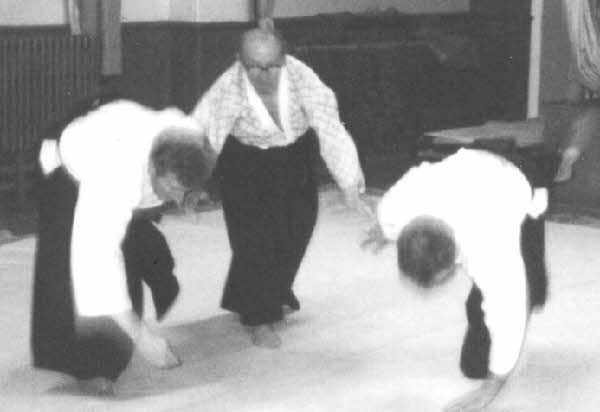 Mr. Mucha's progress in Judo continued and he was to be awarded 2nd Dan in 1967 and 3rd Dan in 1971. At the same time he set up his own Budo (Martial 'Way') club, first in Ormskirk and then Chorley, Lancashire in 1965/6. This was to become the Lancashire Aikikai. During the same period he was graded in Aikido by Nakazono Sensei and Williams Sensei up to 1st Kyu. One of these gradings was taken success-fully with a broken bone in his foot!

As Chiba Sensei was based in Sunderland at the time this involved a great deal of travelling. Often accompanied by Mrs. Mucha he journeyed all over the country once or twice a month to practice Aikido with his teacher.

Mr. Mucha’s persistence and dedication were rewarded by the award of 1st Dan in 1969, 2nd Dan in 1972 and 3rd Dan in1975, all awarded by Chiba Sensei. He was also awarded his Teacher's Certificate from the Seikai Hombu in 1974. He asked Chiba Sensei to write on the back of the certificates what they were, as he could not read the Japanese script on the front!