In 1975 Chiba Sensei returned to Japan with his wife and 5-year-old daughter and since then he has moved to San Diego, USA. Despite this distance Mr. Mucha still considers Chiba to be his teacher and has continued since then to teach in the way that Chiba Sensei had taught him. Neither has he taken a grading since, though his continued practice and experience probably mean that he could have achieved a higher grade. He did not wish to go to anyone else but to continue the work that Chiba Sensei had started.

Although he continued to teach Judo his students began to switch to Aikido and there was 'competition' from karate and other martial arts at that time. Gradually Mr. Mucha's teaching developed so that he was concentrating on Aikido.

In the years that followed the Lancashire Aikikai expanded until now it consists of eight clubs spread all over the North West, in Chorley, Altrincham, Bury, Hazel Grove, Marple Bridge, Poulton, Preston and St. Helens. To Mr. Mucha, Aikido, as well as being a Martial Art, is a spiritual path. By 'spiritual' he does not mean religious. He is referring to the development of the mind and body.

It is this aspect of Aikido which he thinks is most missing today. 'Aikido hasn't changed as such - people have': he says. Obviously he sees that there is more to Aikido than just learning techniques. One must focus on the warrior spirit, learn Zanshin awareness and develop Ki in practice and daily life.

“Aikido is health giving,” he says, “it is good for everybody young and old.”

Mr. Mucha studied Zazen meditation under the late Taisen Deshimaru (author of 'The Zen Way to the Martial Arts', published by EP Dutton Inc., New York, 1982) and believes that it is important in developing the mind. He feels that most people do not understand the subject, and that the lack of spirituality in Aikido could be improved by more meditation.”You don't have to sit in lotus position, you sit on a chair in the proper way: sit straight, back at right angles to your legs, head following the same line - it's good for your back. Meditation is good for you - you learn to concentrate.”

This ancient wisdom is being borne out by recent scientific studies. Reported at the British Association of Science Festival in Southampton, were studies of the brain-wave patterns of martial artists and athletes ('The Guardian”, Summer 1992). Those who performed well had high levels of alpha waves which are associated with mental stillness. Those who did not perform well exhibited beta waves, associated with information processing - thinking.

Through meditation also we learn a concentration which changes our mental processes so that they become focused and calm. We feel that bringing this ability to our Aikido enhances our stability to act, as our bodies become less inhibited by our intellects.

Iai, the ritual art of drawing the sword and cutting, is also compared by Mr. Mucha to meditation. Iai combines meditation and action: it moves from concentration and physical stillness to explosive focused action and back again. It is thus a valuable lesson enabling us to integrate the apparently contradictory pursuits of seated medita-tion and dynamic action. Iai is taught by Mr. Mucha being, as he says, of spiritual value.

One of the debates that continually rages in the world of Martial Arts is the nature of 'Ki'. Mr. Mucha has very definite ideas about this. “Ki is natural - everyone has it but it is not developed,” he says. You develop it by practice, training, breathing exercises, not merely at your club but all the time. You must live and breathe Aikido and Ki, use extension of Ki all the time... “even when picking up a pint!”

“Everything I do is with Ki you see.”

Mr. Mucha describes Ki as being a universal power in all of nature which, like electricity, you can't see directly. But you can see its effects.

“If you don't believe in Ki you will never have it, but will use strength all the time. 'As a beginner, even without knowing what Ki is you will find out as you progress. It's not something that comes in three easy lessons, you must practice and practice.” “... you will develop Ki as you practice. After throwing, keep your eyes on your opponent and concentrate, be aware all the time that you are in practice, not only when you are in contact with your opponent... before, during and after... in contact with them spiritually.”

In a way Mr. Mucha is the living evidence of Ki power; at 73, and even though he has been ill, he can still throw people... “it's not strength,” says Mrs. Mucha. He can also still take breakfalls, which in some ways is even more impressive.

Clearly Mr. Mucha's Aikido is more than just fighting but he still believes in effective techniques. Many people regard Aikido as a kind of choreographed exercise system but Mr. Mucha sees this as a misunderstanding.

“In the dojo you must harmonise with the opponent so as not to be damaged and some techniques are exercises and are not dangerous, but others are dangerous. Everyone has to go to work the next day - that is why you have to teach safely.

“You must practice soft first so as to learn movement and technique. But Aikido takes a long time. Some people practice just to learn techniques.. they want everything very quick...”

“Aikido would work in a fight. You wouldn't recognise the technique, but the movement would be there. Tenchinage could be performed with a punch in the face rather than the projection under the chin as taught in the dojo...”

But there is more to Budo training. Mr. Mucha describes how he used to train and then drink in the local pubs in one of the 'hardest' parts of Liverpool. He never had a fight or was threatened over the years. He puts this down to the feeling that people would have about you. Your manner and bearing developed through practice. “Aikido makes people more quiet - they don 't jump in the deep end...” “Aikido gives decision making - you make decisions at the proper time.”

We asked Mr. Mucha about the importance of weapons training, as it is very much a part of the teaching given in the Lancashire Aikikai, and we enjoy it almost as much as the Aikido itself. He regards training with weapons to be of great importance, though he says that you could learn Aikido without using a sword. The movements of Aikido are the same as sword movements, and were derived from a very old school of swordsmen in Japan. The practice of sword movements both improves our technique and gives us greater understanding of Aikido. We also train with the staff, or Jo. Both sword and staff give appreciation of correct distance, which is vital to one's safety in many situations. Also, as mentioned above, we practice Iai, ritual sword drawing.

In addition to continuing his practice at the venerable age of 73, Mr. Mucha practices Shiatsu (healing massage), which was also taught to him by Chiba Sensei.

In the early days of Aikido, the Japanese masters could not speak English. We are lucky now that we can listen and be told what to do. But as Mr. Mucha says: “Europeans think they learn a lot by listening but in fact we learn 80% by watching.” Indeed, some of the best teachers in the Lancashire Aikikai trained by Mr. Mucha teach by clear action and with very few words. Too many words complicate matters - it is often easier to understand the action alone when properly demonstrated.

Mr. Mucha has not been to Japan but hopes to visit his Sensei in San Diego this year (1993).

He says that people's attitude has changed today, the present generation are in too much of a hurry and do not properly understand the spirit of the martial arts. But we are lucky to have teachers like Mr. Mucha to help us to try and understand the art that we practice so keenly week after week. 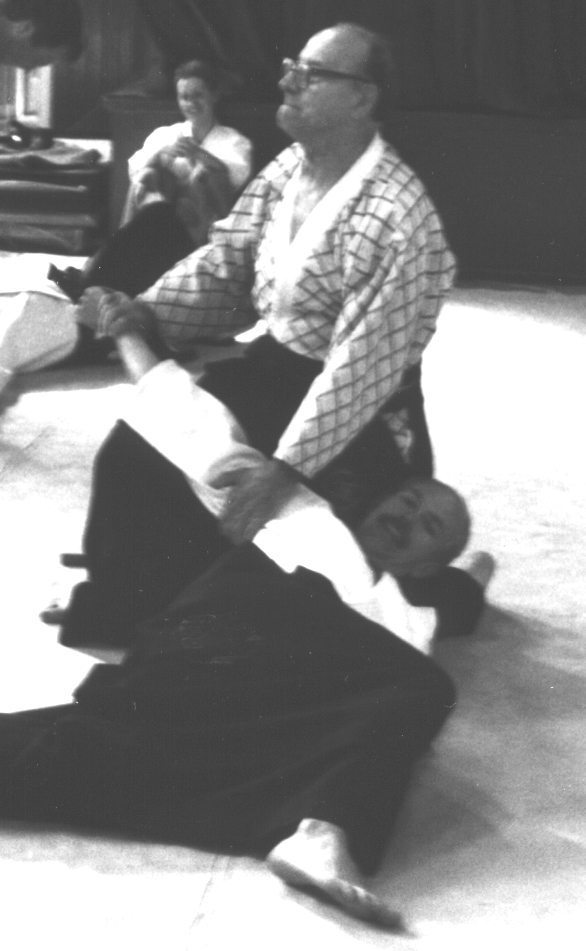