This area provides access to the senior and junior grading syllabus.

As in other martial arts, we have a grading system. ⟨Please note: The syllabus in the white members' handbook has been superseded. ⟩

Following a syllabus allows you to have recognition that you are progressing and learning.

The Junior grading syllabus is validated by the Lancashire Aikikai

Student's should also read background information provided under Member home tab that is not repeated here.

The syllabus has a requirements for weapons. The aim is being to judge the candidates understanding of weapons in relation to Aikido at the grade being undertaken rather than a test of memory.

The Grading Review Group have been asked to clarify what "equivalent" means in the context of weapon part of the grading requirements 5th Kyu to 2nd Kyu where it appears. The following is aimmed at Club Leaders

The weapons part of our syllabus whilst based on the Iwama system creates some flexibility for candidates by allowing other weapons systems acknowledged as having a connection with Aikido to be introduced by agreement with the Club Leader.    (Note: Iaido would not fulfil this connection requirement.)

What is being tested is understanding and form of both ken and jo – through initially as suburi and subsequent grades as partner practise.

Implicit in the Syllabus requirement and hence any 'equivalent' is an increasing progressive base of knowledge and skill of both ken and jo – in the same way that the aikido element is tested for. The grading form carries explanations of 10 competencies that are being tested in a grading – most are appropriate for weapons, as well.

The competence threshold thus rises with each grade – i.e. a 5th Kyu doing Ikkyo should not be the same as a 1st Kyu doing Ikkyo although the shape of the move is broadly similar so it is with weapons.

Our Principal, Mr. Spence, and our Technical Director, Mimuro Sensei, are responsible for grading those who are 4th Dan or higher.

Mimuro Sensei will grade all Dan Grades sitting with a grading panel. Sensei will ask for feedback from the panel following the grading but the Panel will not indicate whether they think the person should pass or fail. A honest feedback on their performance will be given. ⟨ This is not done in private ⟩

Gradings - will generally take place in the local club up to and including 2nd Kyu gradings.

Consistency and moderation of standards for grades will be through Association courses and direction of our Technical Director and Principal of our Association. Our Technical director recognises the standards we have adopted and we should continue to maintain these.

Guidance given in the past by our Principal for gradings......"The grading syllabus is a guide to what might be assessed and hence each item was not mandatory. However that similarly didn't mean that for example weapons would not be examined. There is to be flexibility between younger students and those more experienced but older."

The Senior syllabus should apply to those on a Senior mat. However Examiners and Coaches should familiarise themselves with BAB requirements in respect of Aikido for under 18 year olds and take note of the comment that each item is not mandatory.

Hombu grading fees and associated membership are set in Japan and payable in Yen - details can be found in “7. Grading Admin” - they vary because of currency exchange rates.

It is recommended Clubs should think about running gradings in April and October to coincide with the submission cycle to Japan.

1st Kyu gradings will take place on Aikikai courses and are organised by the Aikikai by appointing a Panel in advance so they may organise themselves and ascertain details of the candidate.

The panel should be briefed by the Club Leader on:

The Panel should discuss, in advance, how the grading will be organised and tasks allocated with the Panel. It is recommended that the calling of techniques should be by one person at any one time – to avoid confusion.

Guidance given in the past by our Principal for gradings......"The grading syllabus is a guide to what might be assessed and hence each item was not mandatory. However that similarly didn't mean that for example weapons would not be examined. There is to be flexibility between younger students and those more experienced but older."

Dan Gradings would be taken on designated Aikikai courses in conjunction with the Technical Director who will sit with a grading panel.

1st Kyu's being graded for 1st Dan will not wear hakama. (See hakama in FAQ)

The Group's Purpose and Role is to support the grading process and standards within the Lancashire Aikikai. Particularly with those who are approaching 1st Kyu and higher by ensuring standards are met before any grading. They will work with Club Leaders on standards. Observe future grading candidates for 1st Kyu and higher to provide feedback on improvements needed prior to any grading.

Having taken 1st Kyu - Senior Dan Grade’s will continue to monitor candidates to ensure the skills and knowledge are being developed for the next grade. (At the direction of our Principal)

Dan grade candidates will give short demonstrations at Dan Grade courses or other courses to prove their ability and readiness to take Dan Grade and / or progression to this goal. Hence the importance of Club Leaders letting our Principal / Grading Review Group know well in advance potential candidates.

Provided the candidate is deemed ready a Dan Grading will then be scheduled at the next opportunity after discussion with our Technical Director.

Club Leaders will submit a candidate history (and list any relevant restrictions or relevalent information), prior to the grading date for Mimuro Sensei and the panel to both our Principal and our Hombu Membership Representative

Ensure Chris Wallace, LA Hombu Rep, has got prior to the grading: your LA blue membership book and Hombu card (and Yudansha book if already a dan grade) and the necessary Hombu grading application form (If going for 1st Dan an application for Yudansha book also required.) That the Aikikai have your grading fee in good time.

See Guidance and Guidelines for Dan Gradings for more information

Our affiliation with Aikikai Headquarters is via Yokohama International Aikido Club, therefore membership of this club and of Aikikai Foundation is due before any Senior grading from 5th kyu onwards. These are one-off payments for lifetime membership.

Members who have been graded by other organisations then Yokohama membership is required. Hombu membership is not required till you grade further.

Members who already hold a Hombu grade, and are therefore already a Hombu member, should give a copy of their membership card / grading certificate for the Lancashire Aikikai records held by our Hombu Membership Representative. Only Yokohama membership will be  required in these circumstances.

Fees are dealt with at “6. Grading Admin”

Following a club grading details of name, new grade, date of grading and who graded is sent off to the Membership Secretary to put into the Aikikai records by recording in the monthly return clubs send. Remember, also, either to pass details to the Newsletter contact in your club details or send directly to the Aikikai Newsletter editor.

Prepare and present a grading certificate when one is not provided by Hombu. This will be for the Junior grades and the 6th Kyu senior grade. A template is available to Clubs on the Resource site.

The Aikikai grading fees by cheque are passed to the Membership Secretary as part of the Club's monthly return if that how you normally pay money. When Clubs receive an invoice from the Hombu Membership Rep for Hombu grading fees they should pay the Lancashire Aikikai by preferably BACS and tell the Treasurer. For other grading fees please pay them in your monthly submissions

For these grades (5th Kyu and above) costs vary according to currency exchange rates. The Aikikai fixes the fees twice a year in May & November based on exchange rates to run for 6 months

It is recommended Clubs should think about running gradings in the weeks immediately prior to the submission dates of 30th April and 31st October, although there is no restriction on when gradings may take place

Hombu Cards & Yudansha Book – These need to be kept safe, as they need to be sent back with every grade application for updating.

8. What the certificates say

Little bit different on Dan and Kyu grade ones but the nuance is the same.

In general it says from RHS to LHS, column by column

See example of certificate and translation 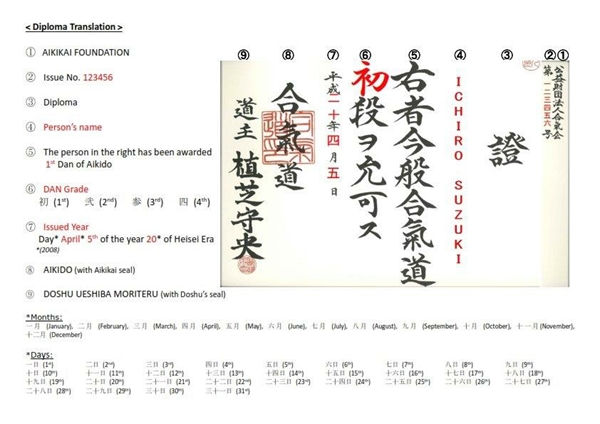 Blue Lancashire Aikikai Membership books are issued to all members. These Books are used for all Grades to record annual membership, hold their current BAB Insurance Certificates, course attendance and grades. As part of joining a passport photograph is expected to be stuck in the book

Yudansha Books are issued and apply from Shodan and in some aspects overlap with the blue book. Some Dan Grades’s have expressed a desire to keep both books going (and stamped) there is no objection to this. The Yudansha book should at the least record the grade and be stamped for courses run by our Technical Director and other high ranking teachers

Both Books are to be kept

Similarly to the Hombu card for Kyu grades to be recorded on the Yudansha book are to be returned to record new gradings - so keep safe.